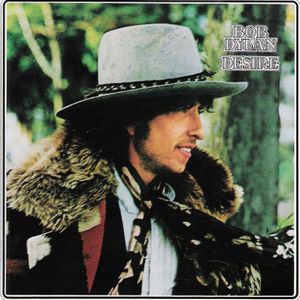 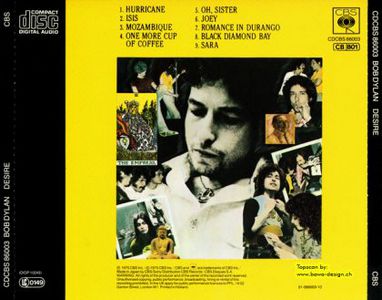 Review by Stephen Thomas Erlewine
If Blood on the Tracks was an unapologetically intimate affair, Desire is unwieldy and messy, the deliberate work of a collective. And while Bob Dylan directly addresses his crumbling relationship with his wife, Sara, on the final track, Desire is hardly as personal as its predecessor, finding Dylan returning to topical songwriting and folk tales for the core of the record. It's all over the map, as far as songwriting goes, and so is it musically, capturing Dylan at the beginning of the Rolling Thunder Revue era, which was more notable for its chaos than its music. And, so it's only fitting that Desire fits that description as well, as it careens between surging folk-rock, Mideastern dirges, skipping pop, and epic narratives. It's little surprise that Desire doesn't quite gel, yet it retains its own character - really, there's no other place where Dylan tried as many different styles, as many weird detours, as he does here. And, there's something to be said for its rambling, sprawling character, which has a charm of its own. Even so, the record would have been assisted by a more consistent set of songs; there are some masterpieces here, though: "Hurricane" is the best-known, but the effervescent "Mozambique" is Dylan at his breeziest, "Sara" at his most nakedly emotional, and "Isis" is one of his very best songs of the '70s, a hypnotic, contemporized spin on a classic fable. This may not add up to a masterpiece, but it does result in one of his most fascinating records of the '70s and '80s - more intriguing, lyrically and musically, than most of his latter-day affairs. [In 2003, Columbia/Legacy reissued 15 selected titles from Dylan's catalog as hybrid SACDs, playable in both regular CD players and Super Audio CD players. Each title is packaged as a digipak, containing the full original artwork. On each of the titles, and on each of the layers, the remastered sound is spectacular, a considerable upgrade from the initial CD pressings.]