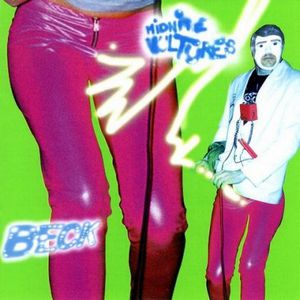 Editorial Review:
Amazon.com
When Beck mangles folk, hip-hop, country, blues, and lo-fi rock into a unique sonic species, he pays homage to his influences in a way that is utterly entertaining. Indeed, the alt-rock vagabond is responsible for some of the 1990s' most indispensable music. In his lesser moments, however, Beck's attempts at emulating his preceptors fall flat, creating only B-grade versions of the genuine articles. Midnite Vultures splits down the middle between the great Beck and the not-so-great Beck. About half the album gorges on retro pulp fiction, a "Becksploitation," if you will, where his relatively straightforward impersonations shortchange his influences. On the slow-burn soul tracks "Peaches and Cream" and "Debra" or the 808-driven tributary "Hlwd. Freaks," he lacks the pipes, heart, and history to pass as a legitimate double-breasted soul man or old-school rapper. The other half, finding Beck in his element, is exhilarating. His unfaltering studio mastery is especially evident on standouts such as the horn-punched "Sexx Laws," the steamy, slap-bass-blasted "Nicotine and Gravy," and the wah-wah bombast of "Mixed Bizness." The album proves that Beck playing the straight-up funkateer will never match ranks with the raw talents of Marvin Gaye, George Clinton, or Prince, but as long as he adheres to more inventive genre splicing, he remains compelling in his own right.
--Beth Massa
~~~~~~~~~~